Colchester School of Gymnastics (CSG) provides gymnastics coaching to children and young people throughout the Colchester area. The School aims to offer access to gymnastics to all. CSG is committed to developing the skills and confidence of each individual. The aim is to have fun while reaching the highest standards of performance.

The club currently has nearly 2,000 gymnasts participating in many different levels of gymnastics which we are able to offer. The participants range from babies right through to adults.

Colchester School of Gymnastics is a charitable incorporated organisation with the registered charity number 1154320.

Colchester Gymnastics Club was formed in 1977. Back then various venues were used for different clubs. In the late eighties a group of coaches got together with the idea of building a purpose built training centre. A management committee known as Colchester School of Gymnastics gained charitable status in 1991 and built the gym.

The Centre became increasingly popular and in 1998 the Colchester Gymnastics Club merged with the Colchester School of Gymnastics which made the centre more manageable. Work on the first extension commenced in 1999 and now offers parents and visitors a viewing area where they can watch the gymnasts training.

Since then the club has grown in popularity. After the 2012 Olympics our waiting list rose to over 1,200. We worked extremely hard to raise the funds to build a second gym on the back of our existing gym. This gym was officially opened on 1st August 2014 by Beth Tweddle MBE. The new gym has given hundreds more people the opportunity to try gymnastics.

CSG has a long established affiliation with British Gymnastics and continues to work to develop access to and awareness of gymnastics with pre-schools, schools and youth organisations within the local community and throughout the Region.

Our coaches are qualified to the appropriate level and all staff and committee members are CRB checked. CSG has adopted BG policies for Equality, Codes of Conduct and Child Protection for which Welfare Officers have been appointed. All officials, coaches, members and parents must adhere to these.

Many of our young gymnasts achieve regional and national recognition whilst children in our Recreational gymnastics classes follow the BAGA awards scheme. These high standards have led to us being awarded the prestigious GymMark and ClubSX Gold Accreditations.

The fees for our pre booked classes are paid for per quarter in advance and the cost per hour will vary slightly depending on the type of class. We have a standard No Refunds policy for all of our classes. When a class is cancelled, if an alternative session has been offered, no refund will be given. However, on the occasion that we could not offer an alternative option then a credit will be given on your account. If a child is unable to attend due to prolonged injury or ill health, a refund or credit will always be given where a doctor’s note is provided. There are times when the club will consider other exceptional circumstances which would require approval at manager’s discretion and these cases will be assessed on an individual basis. 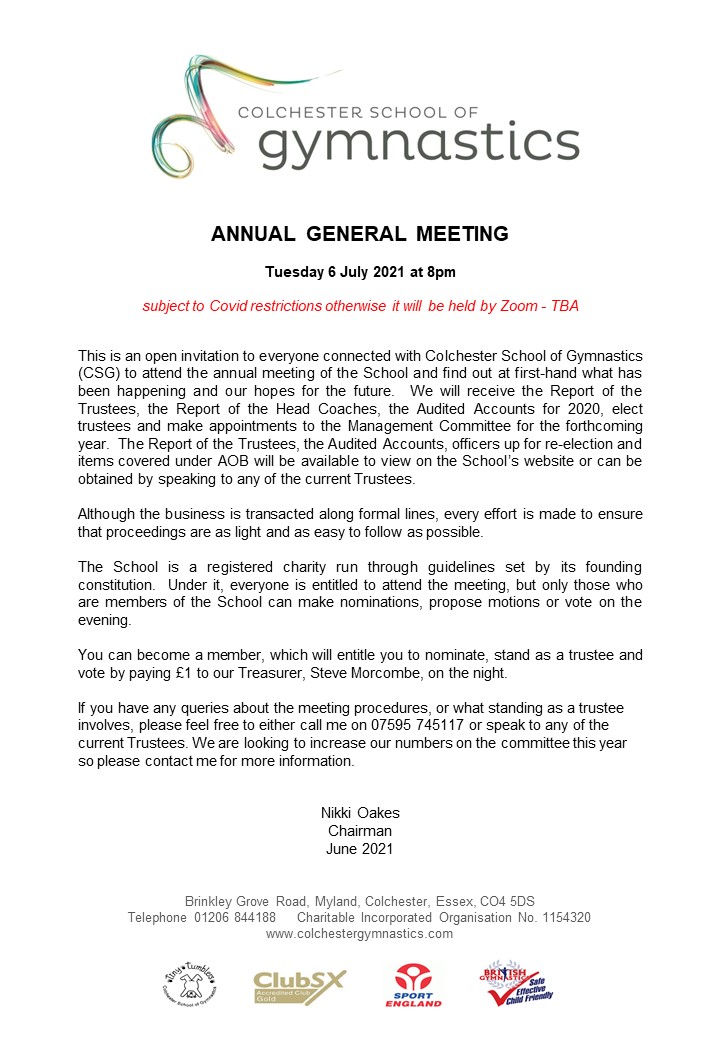 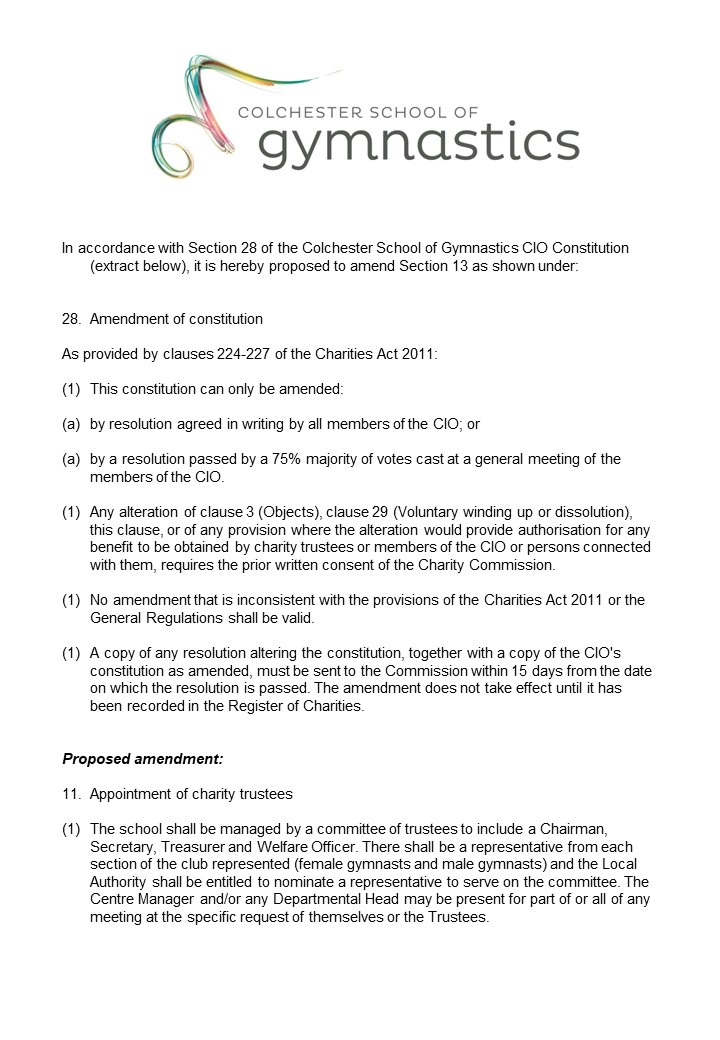 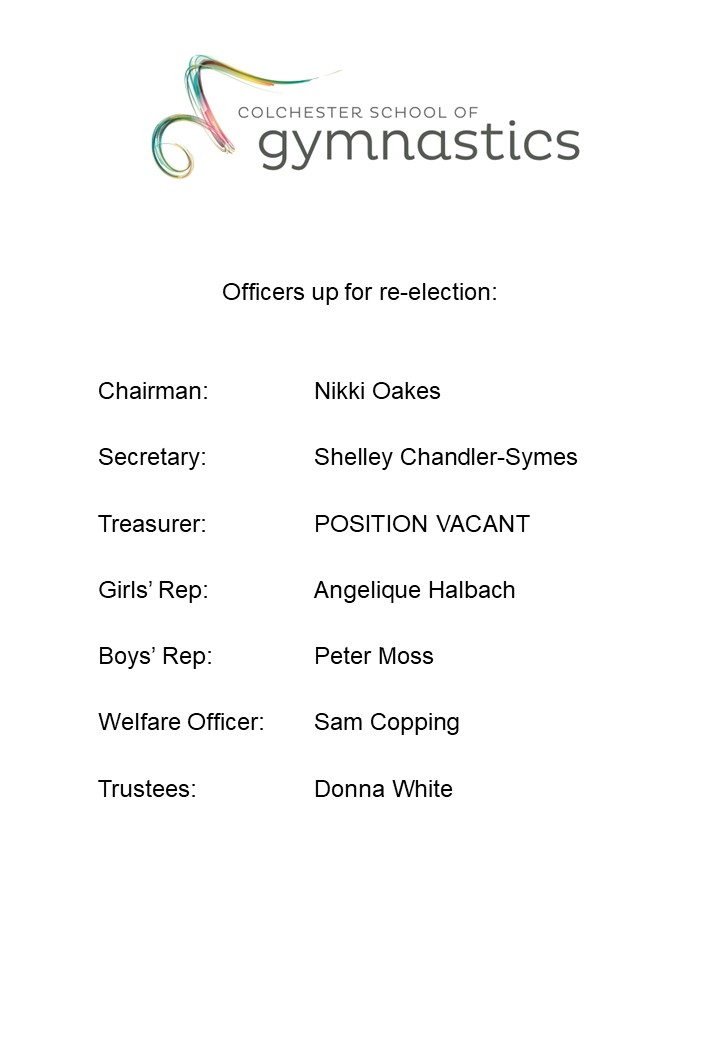 Although there are currently officers in situ at present who are all up to re-election, this doesn’t mean someone else can’t be nominated for any of these roles so if you’re interested in joining the Committee, please complete a Nomination Form and submit it to the Chair no later than 6pm on the day of the AGM.  Your nomination will then be put to a vote along with the sitting member.  We are seeking a new Treasurer and for this position we would require someone with an accountancy qualification or similarly qualified finance background. 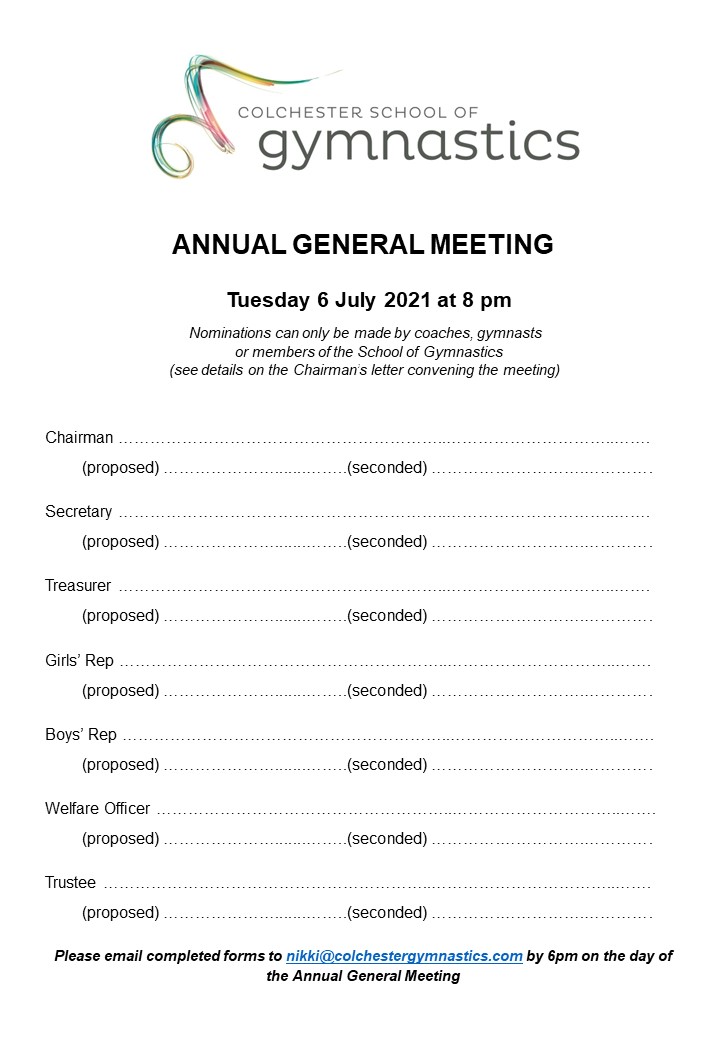 Our chairperson Nikki Oakes with Beth Tweddle and the Mayor of Colchester on the opening of the new gym.